“A good Navy is not a provocation to war. It is the surest guaranty of peace.”
–  President Theodore Roosevelt

About sixty-five ships aided the cause of independence during the Revolutionary War, but by 1785 Congress had demobilized the eleven still serving at the end of the conflict.  A naval force was re-established in 1794 when Congress authorized construction of six frigates, including the Constitution and Constellation, to protect American vessels trading in the Mediterranean from Algerian pirates.  Formal training for naval officers began in 1845 when, under the direction of Secretary of the Navy George Bancroft, the Naval School was established in Annapolis in October 1845, with a class of fifty midshipmen, seven professors, and a curriculum that included mathematics and navigation, gunnery, chemistry, English, natural philosophy, and French.  In 1850 the Naval School became the United States Naval Academy, with a new curriculum that required midshipmen to study at the Academy for four years and to train aboard ships each summer. The institution has been training officers for the U.S. Navy and Marine Corps ever since. 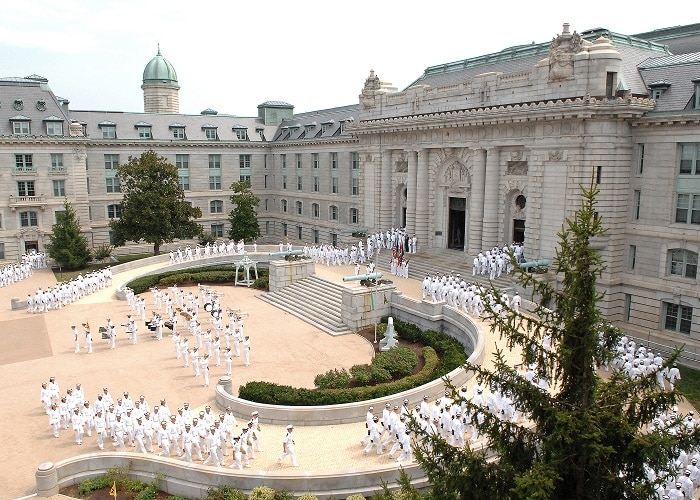 The United States Naval Academy is open to the public all year (a valid ID is required for admission; anyone under the age of 21 without such an ID must be accompanied by an adult with a valid ID), yet for many it remains shrouded in mystery. There are many ways to experience the Academy’s proud and lengthy history. You don’t have to become a midshipman to find out what the life of one is like. A guided tour, delivered by a certified guide and arranged through the Armel-Leftwich Visitor Center, will give you an insider’s perspective. Learn fun and unusual facts about a midshipman’s life, such as how the entire brigade of 4,500-plus is served each meal in less than 20 minutes, and check out an actual room where midshipmen study and sleep. You’ll also visit the Academy’s most cherished attractions, including the Chapel, with its Tiffany stained glass windows and the crypt of John Paul Jones. A tour gives you all this and much more.

Though a tour offers a wonderfully in-depth overview of life on the “Yard,” visitors are welcome to stroll through the grounds at their own pace, but the Visitor Center, where you can get a map of the Academy, is still the best place to start. There are also two restaurants, Drydock Restaurant in Dahlgren Hall and the Naval Academy Club (lunch only, weekdays), where you can stop and get a bite to eat. With over 100,000 visitors a year, the USNA Museum in Preble Hall is a sought-after attraction. The world-class museum, spread across two floors, features the history of the U.S. Navy and the Academy along with artifacts, stories, and interactive exhibits for the whole family. The museum’s holdings include ship models, paintings, prints, flags, uniforms, swords, firearms, medals, sculptures, silver, manuscripts, rare books, photographs, ship instruments and gear, and a wide variety of personal memorabilia. The Second Deck (second floor) features the Class of 1951 Gallery of Ships, housing one of the world’s finest collections of warship models from the 17th, 18th, and 19th centuries.

The USNA Chapel is another must-see when you’re on the Yard. Dominating the Annapolis skyline, the Chapel’s dome rivals that of the State House as one of the most iconic sights in town. Twenty-foot, sculpted doors open to the chapel’s grandiose interior space, complete with four Tiffany-designed stained glass windows. A hidden gem is the Crypt of John Paul Jones (recognized as the “Father of the U.S. Navy” since 1775), located beneath the chapel. Jones died in France while serving as a U.S. liaison in 1792. More than a century later, his remains were escorted across the Atlantic by a fleet of Navy ships and finally laid to rest in 1913 in a bronze and marble sarcophagus modeled after that of Napoleon Bonaparte. Bancroft Hall (the world’s second largest dormitory) is another landmark that must be seen when visiting the Naval Academy. The impressive architecture of its Beaux-Arts façade is matched only by the beauty of the rotunda and Memorial Hall inside. The latter contains scrolls and plaques commemorating all Academy alumni and naval personnel lost in battle. Memorial Hall’s balconies offer exceptional views of the Annapolis harbor and Severn River.  And don’t miss the daily noon formation (every Monday through Friday, weather permitting, during the academic year) that occurs outside Bancroft Hall before midshipmen head off to lunch.

You can also take in a cultural event: midshipmen participate in several musical and theatrical performances throughout the year. There are also spirited sporting events at the Navy-Marine Corps Memorial Stadium or the Brigade Sports Complex; football, lacrosse, baseball, and hockey are some of the Academy’s most popular spectator sports.

Not to be forgotten is Commissioning Week, a period of celebration held in May for graduating midshipmen. Even if you don’t know any graduates, you can still take part by enjoying the flight demonstrations put on by the famed Blue Angels on the Tuesday and Wednesday of Commissioning Week (usually the last week in May). The week concludes with one last flyover of the Navy-Marine Corps Memorial Stadium on graduation day.